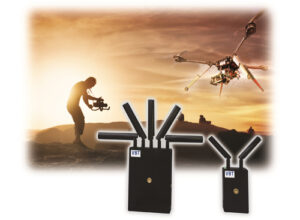 VisBox Technologies (VBT) has introduced a new wireless video link system. The HD-SDI HDMI-based link delivers 1080p HD uncompressed video at clear line-of-sight ranges of up to 300-700 metres reportedly with virtually no delay. The transmitter weighs 224g making it suitable for use in a range of security applications including point to point video links, UAVs (unmanned aerial vehicles) and robotic systems.

Operating over the unlicensed 5GHz frequency band, the VBT video link system transmits 1080p pictures at 1 ms delay without compression. The link allows a range of power voltage inputs from 9-36 volts for compatibility with most camera batteries.  It also provides a multi-casting capability, enabling any number of receivers to view the same transmitter simultaneously.

The plug and play transmitter and receiver both have ten position rotary switches to select channels.  A wireless RSSI indicator with five green LEDs on the receiver enables the signal to be optimised for best performance. The VBT system supports both HDMI and 3G-HD-SDI inputs and outputs and uses MiMo techniques to ensure signal integrity and increase bit rates to transmit higher quality images over the available bandwidth.

FCC and CE certified, the VBT system is housed in aluminium casing making it sufficiently robust and weatherproof for a range of operating conditions in temperatures from 0°C to +60°C.  The transmitter is 114x67x23mm and weighs 224g, whilst the receiver is 178x125x23mm and weighs 548g without antennas.

PSI Awards in depth – Software/IT Product of the Year